Ngorongoro Crater in Tanzania is the largest inactive, intact and unfilled volcanic caldera in the world, formed about 2 to 3 million years ago. Its enormous scenery and abundance of wildlife merge to make it a wonder of the natural world. The collapsed volcano left high walls of about 600 meters that somehow challenge your ability of vision as you gaze on it. Geographically, what has always been called Ngorongoro Crater mistakenly, is rather the largest volcanic caldera in the world, with a floor of about 300 square km (100 square miles). Ngorongoro Crater activities are including game viewing and nature walks along the Crater rim on the Northern Highlands, day trips to Ngorongoro Crater from Arusha city can be organized at a reasonable cost.

The Crater is home to a large number of wildlife, supported by yearly around water supply from the highlands and enough fodder.  Over 300 bird species have been recorded here among them are Egyptian geese, flamingos, blacksmith plover, ibises, hummer head, cormorants, heron, storks, and many more.

Large mammals and plain animals inhabit the Crater among them are wildebeest, eland, zebra, gazelles black rhino, and predators like lion, hyena, cheetah, jackals, and the ever-elusive leopard, as they all bounded by the volcanic walls, they can be spotted in a very close range. Giraffe and impala cannot be found in the crater floor, they always hang around the crater rim, possibly is due to the steepness of the crater wall or as most of the time they have to raise their heads up while walking to only have favorable blood pressure that goes to the head. It can also be luck of palatable food on the crater floor, as they are browsers.

Most of the crater floor is open grassland, more than 24,000 large grazing animals are feeding in this area mainly are, buffalo, wildebeest, zebra, black rhino, gazelles, and other smaller moving both vertebrate and invertebrates. In turn support predators such as lions, Jackal’s hyena, leopard, and many birds of prey.

Soda Lake at the center of the crater floor gets its water from Munge River. Lake Magadi is the feeding site for some flamingos and other water birds. The Lake and pools have become hunting points for many predators that hide in the marsh to ambush large animals that come to drink. Severe dry season lake Magadi and most pools in the Crater are often dried up.

Swamps serve as a reserve for fresh water and food for big and small animals, especially during the dry season. Elephants feed on giant sedge and hippos wallow in the pools, other small and big animals are also coming for water and grazing at the poolside. Giant serge and tall grasses provide shelter for frogs, birds, and insects while most of the predators do hunting around the swamps.

Lerai forest a sole forest patch on the Crater floor is providing food and shelter for the big and small animals such as velvet monkeys, baboons, bush-bucks, elephants, and rhinos. Lerai is a name in Masai for yellow barked acacia.

The temperature in Ngorongoro highlands can get quite chilly in the morning and evening as the altitude is about 2300. Between November and May is the rainy season.

Camping and walking inside the Crater is strictly prohibited by the management of the Ngorongoro Conservation area. Cars allowed in the Crater are 4WD drive only and all cars should be outside the Crater floor before 18:00 hrs. Most of our Tanzania safari and Zanzibar beach packages are including one or two days in Ngorongoro. 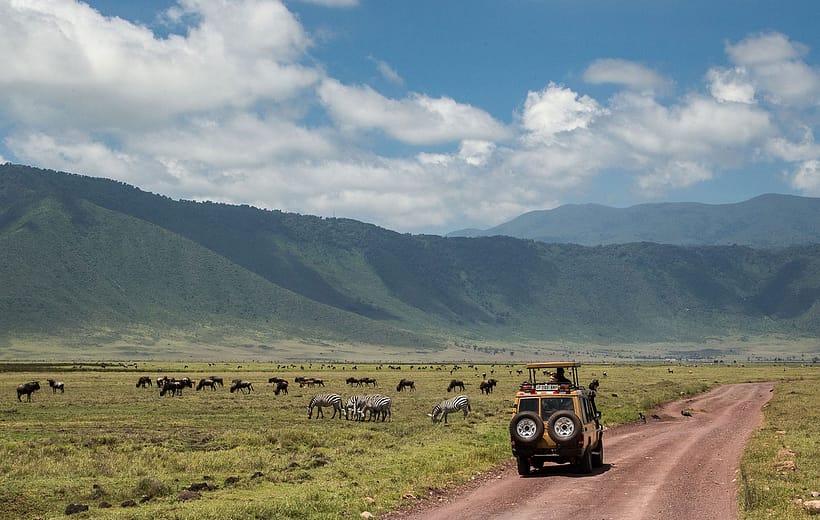